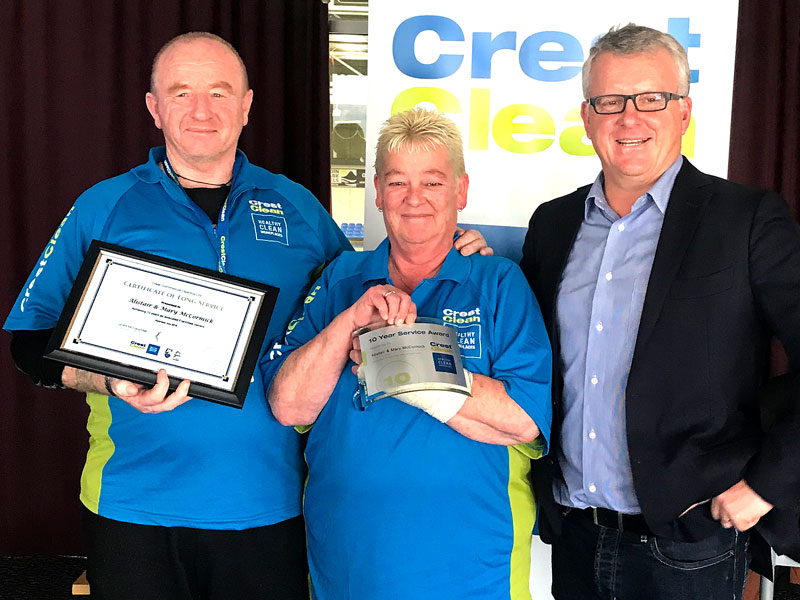 He’s just celebrated a decade with CrestClean but Alistair McCormick admits he has one big regret, “I wish I joined 10 years earlier”.

He and his wife Mary say buying a Crest franchise changed their lives, bringing them financial stability with a guaranteed regular income after Alistair had been made redundant for the fourth time.

They had earmarked $25,000 from Alistair’s payout from Fisher and Paykel to purchase a small Crest franchise.

Mary, who at the time worked in a Dunedin rest home, admits starting a business was a leap of faith and they had faced some challenges. “We thought, we live together, let’s see if we can work together. So we decided to give it a go.”

With four young children, and a mortgage to pay, they couple threw themselves into their work, determined to succeed.

Now a decade on, their business has grown seven fold. Alistair has undertaken a number of upskilling courses over recent years, including Hard Floor Care, Pure Water Window Cleaning and Carpet Care.

As with many Crest business owners, it’s not just the money that gives this couple satisfaction. “The work is satisfying and we take a real pride in what we do,” says Mary.

Doing the job to the best of your ability and maintaining high standards was important, she says. “You are your own boss and it’s you that you’ve got to answer to at the end of the day.”

She says they are proud of all they’ve achieved. “A lot of people still think that cleaners are on the lowest part of the social scale. But with Crest you’re not just a cleaner, you’re a business owner – that’s the big difference.”

Also working in the business are the couple’s daughter, Morgan, and daughter-in-law, Louise.

Alistair says their business has given them a good lifestyle. “We’ve worked hard to get where we are today. We’ve been able to afford to do things we otherwise couldn’t have done.”

They’ve travelled to Australia and have undertaken improvements to their home. “I enjoy being my own boss,” he says. “The CrestClean system works really well if you’re prepared to put in the effort.”

“They are really responsive to their customers’ needs. Some of their customers they’ve had for a number of years and they really love Alistair and Mary.

“Over the past 10 years they would have done just about every type of cleaning work that Crest undertakes. Bars, kindergartens, schools, and offices, they’ve done it all.”