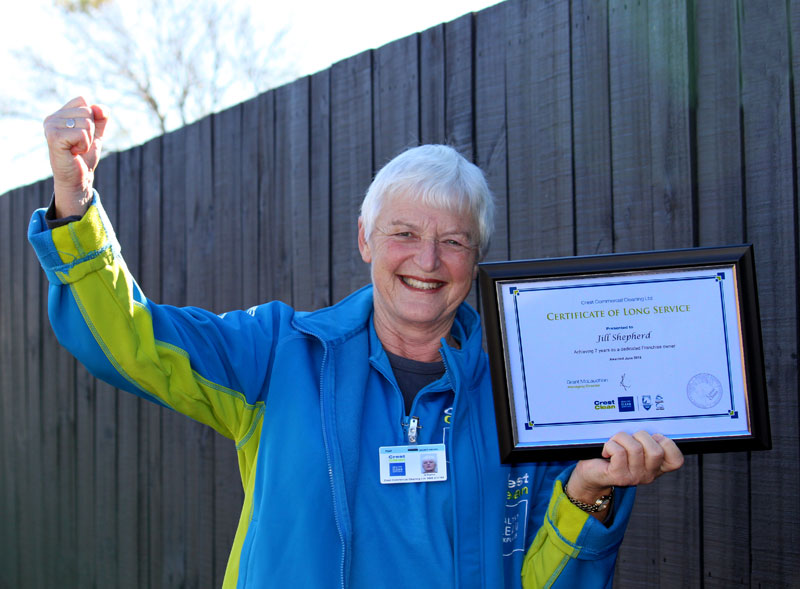 Jill Shepherd has just clocked up seven years with CrestClean.

By the time she was 21 Jill Shepherd had had nine jobs. “I was a bit of rebel when I left school,” she freely admits.

Jill has certainly had a rich and varied working life. She’s been a trainee microbiologist; run a motorcycle parts department; driven vans, and owned and run dairies; and worked at a cake making factory. She’s also dabbled in commercial photography and owned a coffee machine business.

But it’s the commercial cleaning industry where the CrestClean business owner is making her mark. Jill is the company’s Tauranga Regional Trainer and has trained dozens of franchisees over the past few years.

Jill had moved to Tauranga in 2003 and had a hankering to work for herself again. She did a variety of different things before eventually joining CrestClean seven years ago. But she has one big regret about that move: “I just wished I’d found Crest sooner!” she says.

She likes the way the CrestClean system makes it easy to own a business. “It was great being my own boss again and as I’d run businesses before it wasn’t a big stretch for me to have a cleaning business.”

When Jill started with Crest she had a small franchise but quickly saw the potential to expand. She took on more contracts and at one point she employed five workers and was running a business with a turnover in excess of $200,000.

But it was training that struck strong chord with Jill, so when a training role with the Master Cleaners Training Institute became vacant she went for it.

“I thought to myself ‘I’d like to have a go at that”,” she recalls. Being naturally good with people, Jill found the role rewarding. “It is the helping side of things that I quite like and seeing people grow and do well in business.”

Many of the franchisees she has trained have gone on to be appointed to similar positions in the company. That’s testament to Jill’s success as a top trainer and her enthusiasm for the industry and her ability to inspire others, says Tauranga Regional Manager Jan Lichtwark.

“She’s an amazing franchisee and an outstanding trainer and she’s just great with people.

“I know the franchisees are going to come away from their training with a lot of knowledge. Jill gives them a good understanding of the techniques of cleaning but they also get to know about what’s going to be involved in running a successful business.

“They get taught from one of the best operators in the industry.”