LeslieRugby a morale booster for coaches 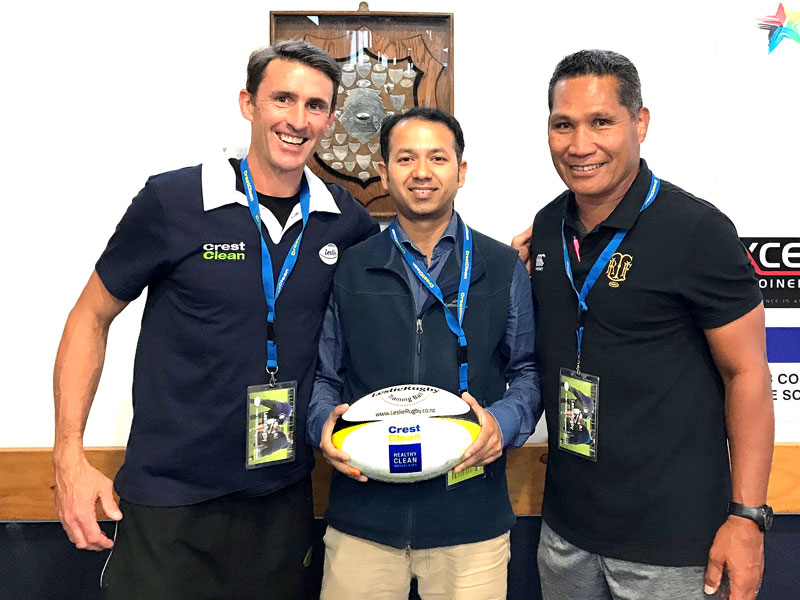 A top rugby official has praised CrestClean’s community programme to increase the number of volunteer coaches.

Jack Kirifi, Taranaki Rugby’s Development Officer, says John Leslie’s flying visit to the region was a great moral booster for people who want to get involved in coaching youngsters.

John, a former Otago Highlanders captain and Scottish international, is being sponsored by CrestClean to deliver a series of coaching workshops throughout the country.

Jack says the coaches who met John learned a lot from the former player who ran two coaching events in New Plymouth.

“Having someone of John’s reputation and standing in the sport brought the wow factor for them.”

He says the coaching sessions proved popular and participants gained new insights and techniques to help them become better coaches.

“John has got the character and personality to deliver the course. He’s got a soft nature, he’s funny and he’s articulate and very knowledgeable.”

Jack says Taranaki is like many other regions where junior rugby suffers from a lack of trained coaches.

“Most parents would like to help but they may be too busy and have their own routines. My role is to try to get more people to become volunteer coaches.

“Ideally we’d like to involve ex-players but most of them have jobs that are either night shift or they work out of town.”

At the workshops, course participants learn the latest coaching techniques and each is given a handy lanyard. It contains details of how to download John’s new free 39-page Junior Coaching Programme.

Later in the day he met a group of junior rugby volunteers in New Plymouth. CrestClean’s Taranaki Regional Manager Prasun Acharya said the event was a big success.

“A lot of people were there, including mums and dads. Everybody was excited to learn the techniques demonstrated by John. There were people there from right around the Taranaki region.”

Later this month coaching sessions will take place in Havelock North and Napier. In June LeslieRugby events will be held in Gisborne and Tauranga.