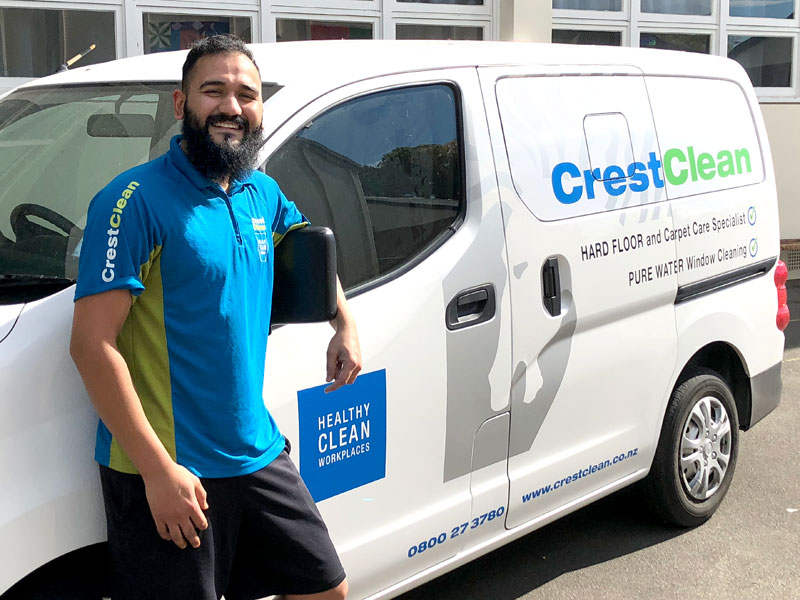 Ajay Kamboj with his Nissan NV200 that’s given him room to expand his business.

Ajay Kamboj might be a newcomer to the cleaning industry but he’s taken a smart decision to futureproof the business with his choice of vehicle.

The 25-year-old soon realised that size would be an issue if he wanted to offer customers a wider range of services. Buying a spacious Nissan NV200 means there’s plenty of room for all the gear he needs.

Ashburton-based Ajay was also surprised to find how economical the NV200 has turned out to be – even cheaper to run than his car.

“It has heaps of space and it’s really cheap on gas, and that’s the really good thing. It’s only got a 1.6litre engine and it is a lot more economical to run than my Nissan Skyline.”

Rob Glenie, Crest’s South Canterbury Regional Manager, says the Nissan van was a smart choice for someone like Ajay.

“CrestClean is looking to roll out Nissan NV200 vans throughout the country.

“Our customers are now looking for a full service provider, which includes, Pure Water Window Cleaning, Hard Floor Care and Carpet Care.
“We have noticed that the small hatch back wagon used by a number of our franchisees is no longer large enough to accommodate all the equipment required.”

Ajay has been with CrestClean for three months and has been able to carry on in his job as a lab technician at a local company. He works night shifts and looks after his Crest customers in the afternoons.

Having his own business will help achieve his plan to becoming a homeowner, he says. “I’m saving for a house and I’ll be looking for a place in Ashburton. I’d like a three or four bedroom home if possible.”

He moved to South Canterbury from Hawke’s Bay and enjoys the lifestyle of the South Island. “I’m loving Ashburton. There’s absolutely no traffic, that’s the main thing. Everything is really close and I don’t have to travel very far at all.”

Ajay, who has two customers in Ashburton, is hoping to increase the size of his business.
“When I can get some savings I’ll expand my business and hire some staff.”

Rob says Ajay has a great attitude to his work. “He started in Ashburton in February and has gone from strength to strength and is enjoying the freedom of being a CrestClean business owner.”