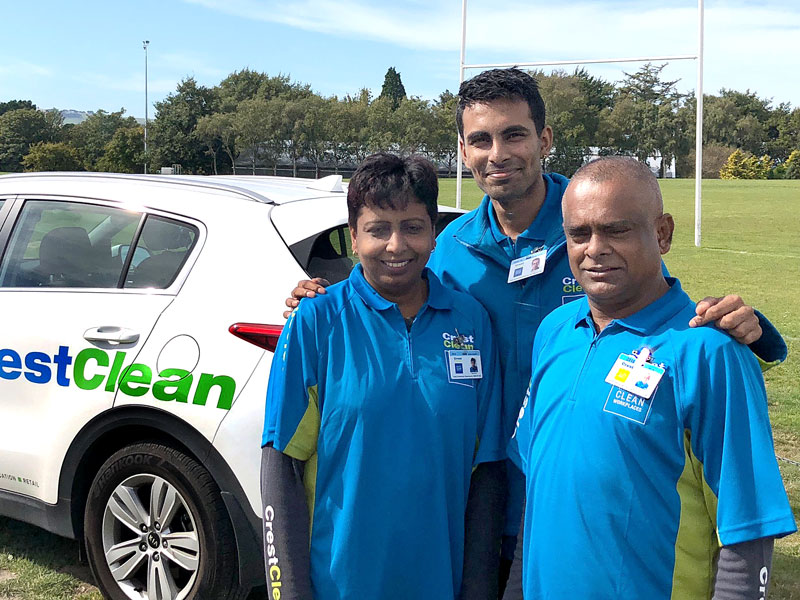 Satish and Sasita Kumar are originally from Fiji. They are seen with their son Aniket.

Joining Crest has brought a positive lifestyle change for Satish Kumar who says he’s feeling fitter than ever.

The former sewing machinist, who came to New Zealand for work in 2002, had spent much of his life in jobs that didn’t involve too much physical activity.

But after being laid off from his Dunedin factory job and following a spell working as tailor in a leather garment company, Satish decided to give cleaning a go.

Last year he and his wife Sasita and their son Aniket purchased a CrestClean business.

“It’s a good job and it keeps you very fit,” says Satish. “I like to be busy and its good working for ourselves.

“My last job was not physical and involved a lot of sitting down for up to eight hours a day.”

He says cleaning has helped him keep his weight under control and he feels a lot happier. “We have a lot more time together and enjoy life.”
They have already expanded their business and have got in some extra help to cope with the workload.

“We have hired two staff so my wife doesn’t have to work long hours,” says Satish.

Antoine Zoghbi, CrestClean’s Dunedin Quality Assurance Co-ordinator, says Satish and his family are always “happy and positive” in their work.

“They have proved from day one that they are extremely passionate and always want to give the best quality for their customers. The feedback from all their customers is excellent.”

Antoine says it was Aniket who had been introduced to Crest by doing some part time cleaning.

“Aniket studied electrical engineering at Otago University and worked part time with Savita Prasad, who has one of the largest CrestClean franchises in Dunedin.

“Learning how Crest operates was Aniket’s aim. As a family they decided to buy their own CrestClean business.

“They felt CrestClean was a great place to invest their money and already they have doubled their turnover.

“Satish and Sasita feel that owning a CrestClean franchise has given them more time for the family as well as a great financial return. They hope to grow with the company as they go forward in life.”