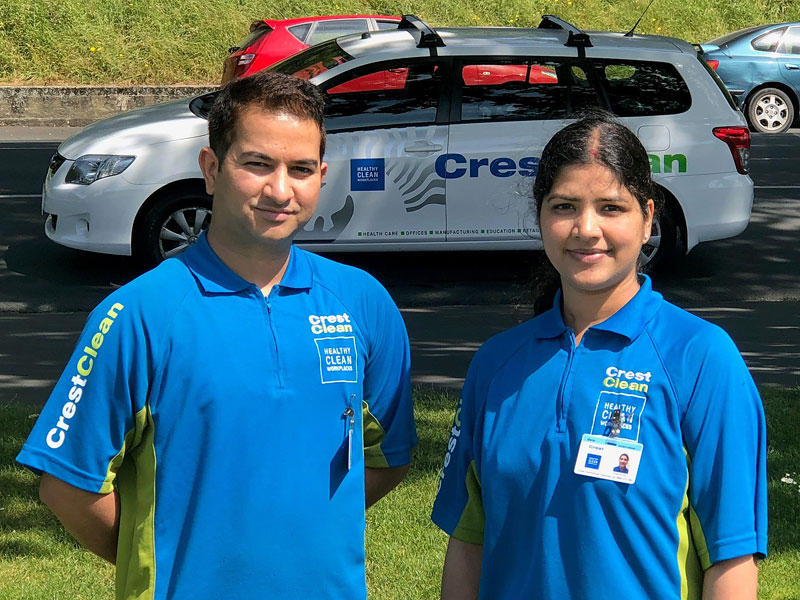 Manoj Parsad Surira and his wife Kaushalya have doubled the size of their business.

They’ve owned a CrestClean franchise for just six months but they’ve already doubled the size of their business.

Manoj Parsad Surira and his wife Kaushalya are loving the freedom from being their own bosses and say it’s better than they could have ever imagined.

It’s a far cry from their old lives when they were employees, working long hours and not having a lot of family time together.

As a department manager at a Dunedin Countdown store, Manoj says it was high pressure role, with constant sales targets to hit and being frequently called in to cover staff absenteeism.

“Working at countdown was really stressful. If your staff called in sick you could end up working six or sometimes seven days a week. It was tough.”

CrestClean came on the couple’s radar through conversations with some friends, who had bought a cleaning franchise.

“I’d heard good things about the company,” says Manoj. “You could earn really good money with no stress.”

With Kaushalya’s experience of working for a local commercial cleaning company in Dunedin, it made sense to work for themselves by buying a Crest business, says Manoj.

“My experience working as a manager so I knew I had the capability to run a business by myself.”

The couple have plenty of family time together as their working day is from 4pm-11pm. It’s given quality time to spend with their 9-year-old son.

“It feels great having my own business. It’s met all my expectations. We can now spend more time together,” added Manoj.

But as well as the flexible working hours, they enjoy the rewards of doing a great job for their customers.

Antoine Zoghbi, CrestClean’s Otago and Southland Quality Assurance Co-ordinator, was impressed by the couple’s commitment to their business.

“Manoj and Kaushalya have proved in a very short period that they both can run and manage their business very professionally.

“Their customers are so happy with the quality they deliver and the feedback I get is excellent,” he said.

As for Dunedin, it’s the best place to live in New Zealand, says Manoj. After emigrating from India in 2010, he studied cookery and went on to work as a chef in a number of restaurants in the North and South Islands.

“Dunedin is just perfect for us. It’s a great city and I have heaps of friends here. It’s not expensive like Auckland and houses are affordable.”