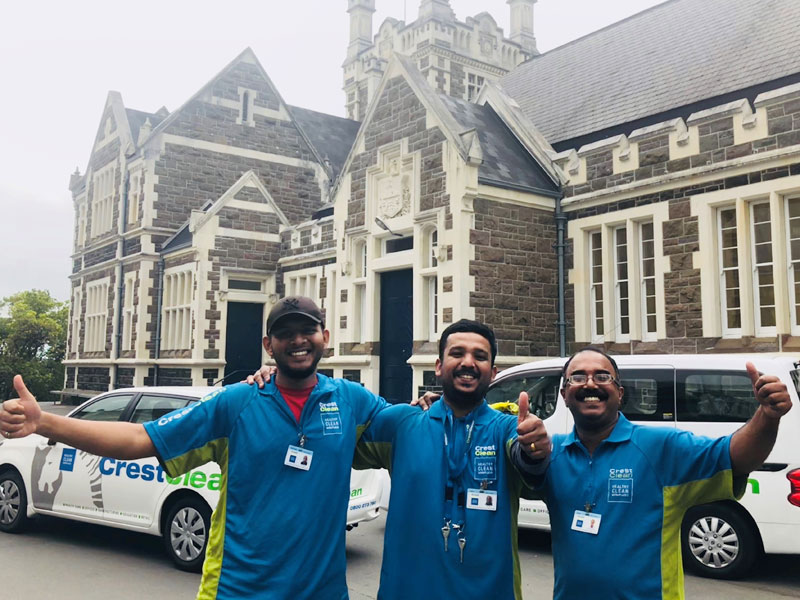 He’s gone from stacking shelves at Pak’nSave to owning and operating one of CrestClean’s largest franchises.

Vinod Anthony’s meteoric rise began three years ago when he bought a small cleaning franchise after securing a bank loan to launch his dream to work for himself.

His determination to succeed has seen the business turnover increase more than six fold and he’s had to take on two staff members to help cope with the extra workload.

And his success has not gone unnoticed. The 35-year-old has won the Franchisee of the Year Award 2017 for Crest’s Dunedin Region.

Regional Manager Tony Kramers says the award is well deserved. “Vinod is one of the most dedicated and reliable operators we’ve got.

“He looks after his staff and customers extremely well. The standout with Vinod is that he’s able to jump into any job that we give him and do an exceptional job.

Vinod loves his work and says getting official recognition is a career highlight. “I feel really proud to have my efforts recognised by the company.”

But success is no stranger to Vinod. Before moving to New Zealand he worked in South India as head of human resources and administration for a large food retail chain.

But he and his wife Rosmin Peter decided to search for a better and less stressful life overseas.

“In India it’s very crowded and highly populated. In New Zealand it’s the opposite, it’s a calm and a quiet place. We really enjoy living here,” says Vinod.

His wife, a registered nurse, arrived in Dunedin first while Vinod stayed behind in Bangalore with their 2-year-old daughter. After eventually joining her, Vinod got a job at the local Pak’nSave working as a night-filler.

Although he enjoyed the work and was well respected by his bosses, he began to check out the possibilities of working for himself.

He liked the way CrestClean structures its business franchise system and he says he was impressed by the company’s training programme.

Vinod is not one to rest on his laurels. He is looking ahead and has plans to grow his business over the next few years.

“I want to take my business to the next level. I have a lot of experience from my previous career when I was in India. I think that will be very useful.”

He believes it is important to ensure customers receive the best service possible. And regular contact with them is essential, he says.

“I have a schedule to meet my customers on a monthly basis. It’s essential to build good relationships and get feedback.”