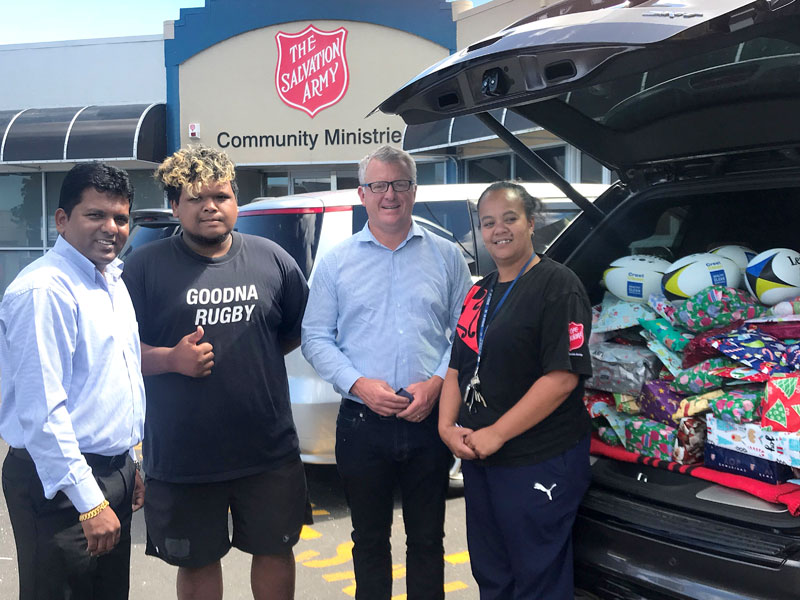 More than 100 Auckland kids will receive a Christmas gift thanks to the generosity of CrestClean business owners.

Viky Narayan, CrestClean’s South East Auckland Regional Manager Regional Manager, was overwhelmed with the response after he sent out a plea asking franchisees to donate to the Salvation Army’s annual Toy Appeal.

Viky says he hoped to get about 50 people to donate – but he was gobsmacked when 110 presents flooded in from kind-hearted franchisees.

“I was totally overwhelmed by the response. Some people turned up with three or four gifts. One family gave us 10 gifts.”

The presents will be distributed by the Salvation Army to struggling families who find it particularly tough at Christmas, says Marlene Bowers, the charity’s Service Centre Manager for South Auckland Community Ministries.

“The toys go out to agencies that we’ve engaged with over the past 12 months.

“We all work with the same clients, government and non-profit organisations. They send through a list and we prepare all the presents.”

Marlene says the Salvation Army appeal will see 43,000 presents given to children throughout the country. But the number of cash-strapped families is particularly high in Auckland.

Auckland’s high rents means many families struggle just to make ends meet each week. “Rent take a lot of money for these families and 80-90 percent of what they are getting in their hand is going into rent. After they pay the basic living costs there is nothing left.

“It’s especially bad at Christmas time where they can’t afford gifts for their children.”

Marlene says it’s heart-breaking for parents who can’t provide a gift for their children. “They are ashamed they can’t do that.”

In the final week before Christmas, the charity sees a big demand in families needing help. “Clients who come requiring support through Christmas with food parcels will also have an opportunity to receive presents for their children.”

But it’s not just mums and dads who need support for their children. “We are also dealing with grandparents who are raising their grandchildren plus there are solo parent families as well,” she added.

“When we are on the ground we see the faces of not just the children but the parents knowing that their children can now enjoy Christmas and not miss out.”

Viky had asked franchisees to donate a $10 present for a boy or girl. He says the idea to join in the Toy Appeal was through learning of the hardship faced by some Auckland families from his contact with schools that were CrestClean customers.

He believes the appeal struck a chord with CrestClean personnel as many were originally from overseas and had faced hardship when growing up.

“They’ve come from many different parts of the world and would have seen or experienced poverty themselves.

“Christmas is all about gifts and giving and so many kids don’t get presents due to their home circumstances. I thought we could do something involving our franchisees.”