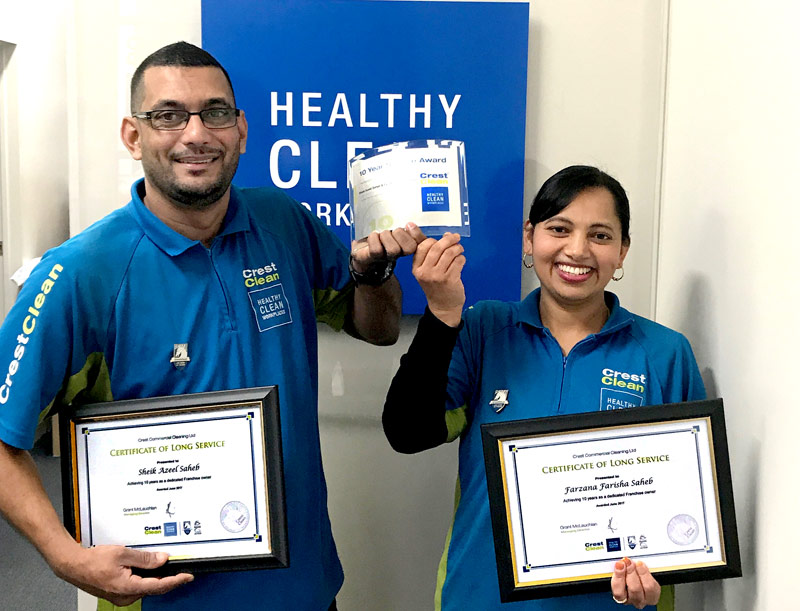 Sheik Saheb and his wife Farzana are celebrating 10 years with CrestClean.

Following a full-on day at a large Countdown store in New Zealand’s biggest shopping centre he had a unique way of chilling out from the stresses of his top management job.

After a quick cuppa at home, Sheik Saheb would change into his CrestClean uniform and begin his evening job working on his cleaning business.

The contrast couldn’t have been more extreme from looking after the Countdown outlet at Auckland’s Sylvia Park shopping mall. But cleaning was the perfect way to unwind from his job as an Assistant Branch Manager with the supermarket chain, says Sheik.

As he celebrates 10 successful years with CrestClean, the 41-year-old still remembers how it was before he quit his job with Progressive Enterprises to go fulltime with his cleaning business.

“In my daytime job I was looking after about four or five different departments in the store and there were strict budgets to make and it was quite stressful,” he says.

“As soon as I came home I would have a cup of tea and get ready for my CrestClean job.

“Going out into a different environment really helped to get rid of all the pressure and the stress I had had throughout the day,” he added.

He found cleaning gave him a new-found freedom and he thrived on the buzz of having his own business.

“Working in the evenings meant you were your own boss and you could make your own decisions,” he added.

He loved the job satisfaction of being a small business owner – plus there was the bonus of the extra income his expanding franchise was generating.

“The money and the financial reward that I was getting from CrestClean was absolutely brilliant. The second thing I liked about CrestClean was the customer satisfaction.

“I would do the job and the customer would compliment me that he was happy, and that gave me peace of mind I was doing a great job.”

He says the positive feedback helped to make the decision to concentrate fulltime on his CrestClean business.

“It went a long way and made a huge difference in my career and was an inspiration and acted as a motivation to take a step up as well and expand my business.”

His wife Farzana, 39, a supervisor at pharmaceutical company, later joined him fulltime in the business as he took on more work and the size of their franchise grew.

Since joining CrestClean they’ve more than tripled the size of their franchise.

Sheik says their cleaning business has given them a head start. They invested in the property market with a large lifestyle block and at one time they had three properties in the Auckland area
.
And they have been able to purchase a two-storey five-bedroom home, which has plenty of room for their teenage boys.

While working together might not suit everyone, Sheik says a big plus of being a franchisee is they get to see a lot of each other.

“It’s absolutely perfect. We have never had any disagreements or any arguments.

“That’s one of the pluses of the job. We have a very good relationship and are a very happy family.”

A family holiday to Fiji is on the cards for Sheik and Farzana with the cash they received from CrestClean to mark their Long Service Award.

“He’s very passionate about his work and is a hardworking guy. He has great relationships with his customers and they all know him well.

“He runs his business extremely well. Anyone who has commitment and is prepared to work hard will see some great financial rewards from cleaning.

“We always need new teams and there are plenty of opportunities to start your own cleaning business with CrestClean.”