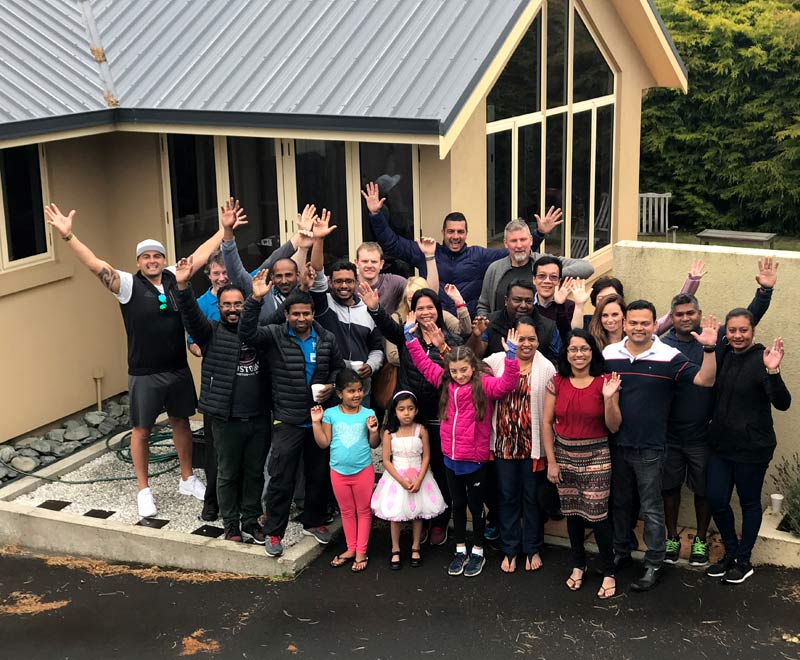 Franchisees and CrestClean staff gathered to help the couple celebrate moving in to their new home.

Friends and colleagues joined in the fun to celebrate a new home for Dunedin franchisee Amol Prakash and his family.

The day was also a double celebration for Amol, who has clocked up five successful years with CrestClean and tripled the size of his business in that time.

For the 34-year-old dad, running his own CrestClean business means he gets to spend plenty of time with his wife Leslie and their young children, Christal 5 and Thomas 1.

And it was having family time, he says, that was the driving force behind the couple’s decision to move to New Zealand, turning their back on their busy lives in Dubai and his corporate management job.

As he gazes out at the fabulous seas views from their spacious new home in one of Dunedin’s picturesque hillside suburbs, Amol reflects on how much has changed since they joined CrestClean.

He loves the work and being at the helm of his own company – a far cry from the stresses of working in the corporate world.

In Dubai his job at a major bank was demanding and stressful, frequently involving long hours in the office.

As a relationship manager, specialising in currency trading, Amol had the responsibility of looking after the investment interests of wealthy Arab clients.

“There was not much time for family as I was working nearly 14 hours a day,” he recalls.

“And there was a lot of after-hours work. It was often difficult to sleep because you are always thinking about tomorrow. You take the stress home with you.”

Amol and Leslie, a psychiatric nurse, moved to New Zealand when she was offered a job in Dunedin. With his finance background, Amol soon landed a good job, and secured a role with American Express carrying out market research in the South Island.

But with the arrival of their first child, they soon realised working fulltime was too much for both young parents.

“After Christal was born someone had to leave their day job, it was either me or my wife,” said Amol.

With the goal of working for himself, Amol began searching for a business that would fit around family life.

From 25 companies on his list, CrestClean soon became the obvious choice, says Amol.

“Crest provides a guaranteed income with less risk that other companies I looked at. It was a strong company with 20 years back up.”

At the time Amol had also considered purchasing an Indian restaurant – a decision he says he’s glad he didn’t make.

“If I’d started a restaurant I think I definitely would have been in trouble because it’s a very seasonal business. Crest was the best decision.”

Although Amol didn’t open a restaurant, his new home could have been mistaken for an Indian eatery when the couple threw a party to celebrate moving in.

About 30 guests at the house warming party were treated to a range of mouth-watering traditional dishes from south India – all prepared by Amol and Leslie.

They love living in Dunedin and say it has so much to offer. “It has lovely scenery, friendly people and less traffic. You can get to any part of the city in 10 minutes,” says Amol.

Tony Kramers, CrestClean’s Otago Regional Manager, said the house warming was a very enjoyable social occasion. “We all experienced some amazing food and some great chat.”

And he said it was particularly pleasing to see CrestClean personnel buy their own homes.

“As a manager you have a sense of accomplishment being able to give these people the work and the opportunity to be able to buy what is likely to be the biggest purchase of their life.”

He said Amol’s success was through hard work and commitment to his business.
“He’s very autonomous in the way he runs his business. He looks after his customers and staff very well.” 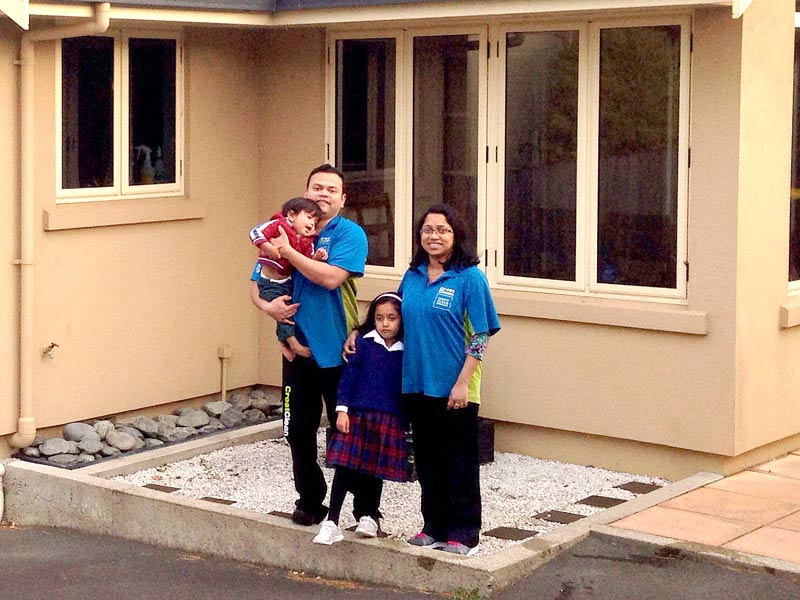 Amol Prakash and Leslie Antony with their children Christal and Thomas.