Boss aims to cook up a storm for charity 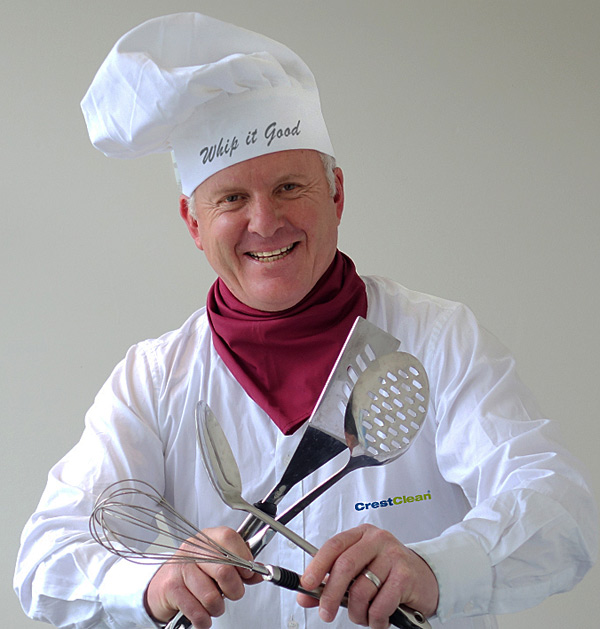 Grant’s polishing up his culinary skills for the charity fundraiser.

CrestClean’s Grant McLauchlan is aiming to shine in the kitchen by cooking up a storm when he joins celebrity chefs in a sizzling fundraiser to help struggling families.

Grant is among other high-profile New Zealand managing directors and CEOs who have accepted the culinary challenge. The event aims to raise money for FoodShare, a social venture that rescues food destined for landfill and redistributes it at no cost to social service agencies.

The competition hots up on October 19 when some of the country’s leading chefs team up with the bunch of top business bosses with the aim of producing a mouth-watering meal for invited guests on the night at Dunedin’s Forbury Park Function Centre.

In the meantime, the participants have pledged to raise as much as possible by involving their own staff who are being encouraged to back their boss by supporting the charity.

This is where Grant really needs your help to make this great event an outstanding success by making a heartfelt donation to FoodShare via his Givealittle page at: https://givealittle.co.nz/fundraiser/crestclean-ceo-cookoff

The CEO CookOff is a first for New Zealand and the major fundraising initiative this year for FoodShare. It aims to raise $50,000 from the event, with FoodShare’s goal this year to deliver half a million meals to those in need from food that would otherwise go to waste.

Grant is fully behind the charity’s aims and is encouraging CrestClean franchisees, customers and suppliers to get involved by supporting him and making a donation to FoodShare.

“Cutting down waste is a big element of sustainability, which is one of the key pillars of CrestClean,” said Grant.

“Food that is being thrown out is an incredible waste for society when there are people in this country who are really struggling to feed their families. It’s a shocking situation,” he said.

“FoodShare is a great organisation. It gets the full support of CrestClean. As a responsible corporate we feel strongly this is something we can really get behind.

“Crest has always had a very social conscience to look after our team and our people. We feel this is a great opportunity to take this further and dip into our own pockets to help people in need in New Zealand.”

And Grant expected the CEO CookOff to resonate with many of the more than 500 CrestClean franchisees all over the country.

“We would be asking them as successful business owners to think favourably about supporting my campaign to raise money for FoodShare.”

Small amounts all add up to a lot, he said, and CrestClean hopes to outshine other organisations by raising the most from the CEO CookOff.

While the kitchen is not his usual domain, Grant says he’ll be getting in some practice before the big night, when 250 guests will be fed and entertained. And he’s open to any cooking tips that may come his way in the run up to the gastronomic extravaganza.

He said the team of business leaders would play “second fiddle” to the celebrity chefs on the night. “We are their sous chefs to provide support. I guess we’ll be the circus act beside the serious part!”
Please be generous and go to Grant’s Givealittle page and make a donation. Go to: https://givealittle.co.nz/fundraiser/crestclean-ceo-cookoff