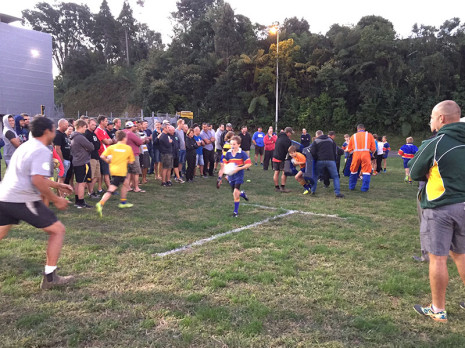 A lot of positive feedback has been gained from junior rugby coaches, players and parents about the CrestClean LeslieRugby Junior Rugby Coaching Programme sessions.

Over 100 junior rugby coaches, players and parents eager to learn skills and drills to improve their junior rugby game turned out in full force at the New Plymouth round of the CrestClean LeslieRugby Junior Rugby Coaching Programme.

“Feedback has been super positive,” John says. “Word is definitely being passed around the rugby community to get to these high value demonstrations and for coaches and parents to get their hands on these coaching booklets.”

“It was interesting. I talked to a few of the parents that were there and they were impressed with how the session content and how it was run,” he says. “The skills and drills booklets were very well received. Everyone appreciated the opportunity to improve and to learn.”

The coaching session was featured in the Taranaki Daily News.

Coaching sessions will also be held at Hawera High School at 4pm and Southern Rugby Football Club, Hawera, at 6pm on April 6.