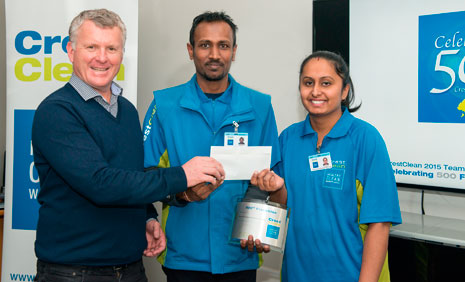 Relocating from Auckland to Nelson was an easy decision for Crest’s 500th Franchise team Danial Prasad and Arishma Singh.

“Auckland is very populated and busy,” he says. There is a lot of competition and it is expensive, especially if you want to buy a house. Nelson is a very nice place. The scenery is beautiful. Everyone is friendly. It has been a great lifestyle change for us.”

Achieving 500 Franchises is a milestone Crest is very proud of. As part of celebrations, Managing Director Grant McLauchlan presented Danial and Arishma with a plaque and $500 cash each for being the 500th Franchise.

“We are very proud of achieving 500 Franchises and it is something we would have only dreamed of achieving 19 years ago when we started our business in Dunedin. Congratulations Danial and Arishma. Welcome to the ever growing Crest family,” says Grant.

Danial and Arishma were overjoyed when they received a letter from Grant advising them of the good news.

“To be the 500th franchise was a big surprise. We are very happy. It is very generous of Crest to give us $500 cash each. Thank you so much,” says Danial.

Danial and Arishma relocated from Auckland to Nelson under Crest’s Move to the Regions Programme. They completed their training in Auckland, purchased their vehicle and made sure it was sign-written before they left so they could hit the ground running in Nelson.

The husband and wife team never considered moving to Nelson until they discovered the Move to the Regions Programme.

The programme offers a $2000 relocation payment and an opportunity to pay a lower start-up cost to suitable people willing to settle outside Auckland and Wellington.

“I never thought of moving to Nelson until I found out about the Move to the Regions Programme,” he says. “Now that we are here, it was definitely the right choice. We enjoy Crest. It works well.”

“They are doing very well and it is great to have them part of the team. They have just finished their British Institute of Cleaning Science Cleaning Professional Skills Suite Module 1 training. Congratulations on being Crest’s 500th Franchise.”