Upskilling a way of giving back to community 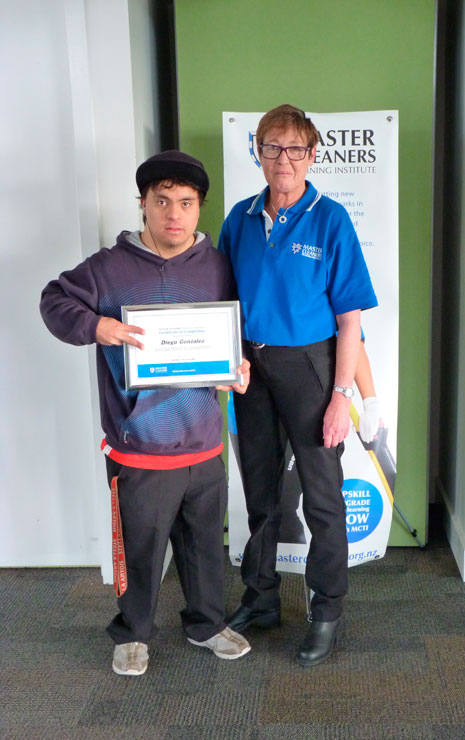 Diego Gonzalez could not stop smiling after he received a certificate of completion from the Master Cleaners Training Institute acknowledging his achievement.

MacLaren Park Henderson South (MPHS) Community Trust, which is one of CrestClean’s customers, asked Auckland West Regional Manager Caroline Wedding to see if there was a training program suitable for Diego.

Auckland Operations Coordinator Julie Griffin designed a program for Diego who has Down syndrome that covered washroom cleaning, toilet cleaning and floor mopping.

Julie delivered this program over a number of weeks as part of CrestClean’s Community Project.

Rebecca George-Koteka, of MPHS Community Connections says Diego, who has been working as a cleaner at MPHS for about a year, is hardworking, conscientious and a delight to have around.

Diego works 12 hours per week. Diego’s general cleaning duties include emptying rubbish bins and changing rubbish bags, making sure there are enough hand towels in the bathrooms, cleaning the toilets, wiping down the basins, sweeping and mopping floors.

“Diego enjoys being able to work and the staff engagement. He always comes in and talks to everyone. He was ecstatic to be able to do the course,” she says. “We knew it was going to be hands on training for him. It was broken down into three modules. Diego ran into the office and showed everyone his certificate. He was so happy.”

Rebecca says allowing Diego to do the course meant a lot to him.

“Thank you to Adam and Jill for identifying that this could be done for him and for giving him the opportunity to do this at his level,” she says. “Thank you CrestClean and Master Cleaners.”

Master Cleaners CEO Adam Hodge says it was great to be able to help Diego complete his training and give back to the community.

“It was great for Master Cleaners to be approached in the first place and was evidence of the respect that MCTI has gained in the community since its inception.”

CrestClean and Master Cleaners would like to thank Rebecca from MPHS for all her assistance in helping to make Diego’s training a success.