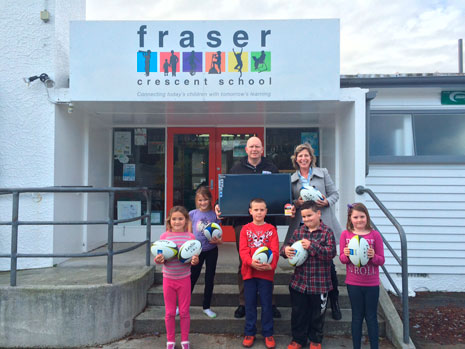 Fraser Crescent School Principal John Channer was thrilled to receive a new 32” Panasonic TV and 27 rugby balls after he won the CrestClean competition at the New Zealand Principal’s Federation Conference.

It was John Channer’s lucky day.

The Fraser Crescent School Principal won a 32” Panasonic TV and 27 rugby balls as part of a CrestClean competition he entered at the New Zealand Principals’ Federation Conference.

Conference attendees were invited to guess how many rugby balls were inside a specially built clear plinth. The correct guesses, of 27 balls, were entered into a draw to win the brand new TV and rugby balls.

“What an awesome prize! Children like the rugby balls,” he says. “We are just working out where we should put the TV. I am thrilled with the prize. Thanks CrestClean.”

“It was nice to give a prize to a local school in the Hutt Valley community,” she says. “It was nice to see the principal happy and hear great feedback about the gifts received.”

It was CrestClean’s eighth time at the NZPF Conference. CrestClean is an NZPF Gold Business Partner and are proud to support the New Zealand Principals’ Federation.