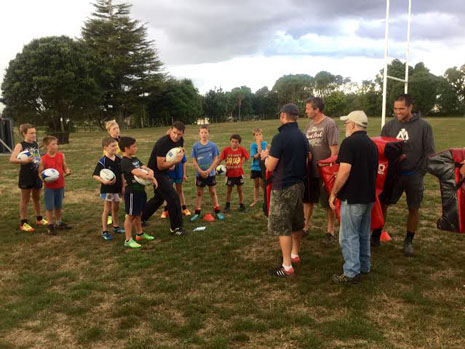 John Leslie and the kids demonstrating a skill while coaches watch and learn.

The article titled “Strengthening junior rugby” appeared on page 19 of the community newspaper and highlighted the importance of the grassroots rugby initiative.

The clinics are aimed at junior rugby coaches and parents who are interested in coaching the game in the future. It promotes fundamental skill development and makes it easier for coaches to deliver a high value rugby practice.

During the coaching clinics, which are run by former Highlanders and Scotland Captain John Leslie, a team of 12-year-olds demonstrates 14 core skills while he explains his coaching philosophies and tips for keeping the energy high and the game fun for kids.

Four engaging and informative clinics have been held in Wellington this month.