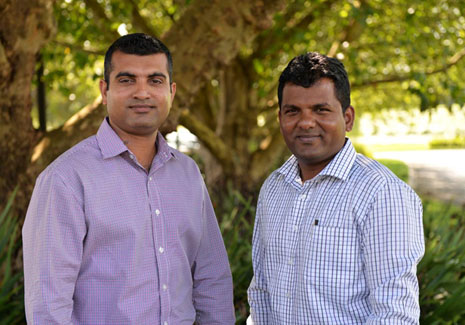 CrestClean runs in the Narayan family – Rajesh, left, and Viky, right, were both franchisees. Now Raj is Crest’s Quality Assurance Co-ordinator for Auckland and Viky is Regional Manager of South and East Auckland.

Rajesh Narayan was introduced to CrestClean by his younger brother, Viky Narayan, Crest’s Regional Manager for South and East Auckland.

“When I came to New Zealand I was working for Sky TV and it was okay but I didn’t like the hours,” Raj recalls. “I was thinking of investing in something and going out on my own, and it was Viky who came up with the idea to purchase a Crest franchise.”

Five years later, Raj is pretty happy with the results. He’s grown his business from servicing just two sites to a total of 15 and he’s recently taken on the role of Quality Assurance for the Auckland region, assisting the Regional Managers with customer service and franchisee audits, as well as training Induction Trainers and teaching the Module 1, Module 2 and Hard Floor Care courses for Master Cleaners Training Institute.

“It’s fun and you get to meet new and interesting people. I like talking to new franchisees and giving them ideas about how to help their businesses. When they come back and say how much it helped, it feels really great to get that positive feedback. That really gives me a boost,” he says. “I feel like I’m making a difference.”

Crest has made a difference in Raj’s life, as well. “I didn’t want to come to New Zealand. My parents did, but it was a good move. Back home I was a brand manager for a company for 14 years and when I came here I had to start over and it was a struggle. When I started with Crest everything changed. Life wasn’t so hard and I had great support from Viky.”

Raj’s wife is also a great help and he says being able to give his children, ages 7 and 16, a good education and treat them with the gifts they want is part of his success. He’s also in the process of purchasing a new house.

“I’m just working on the final steps for the financing and it should be all set in another week’s time,” Raj says. “Crest was really helpful with that. You know how banks are, but a letter from Crest and they just stop asking questions.”