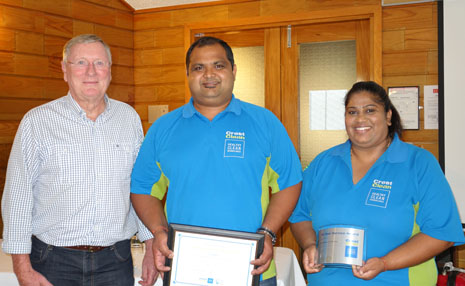 Davendran and Prithi Nair thought they might never be able to buy a house.

Originally from Fiji, they decided to purchase a CrestClean franchise because Prithi’s brother in law was in the business and they liked the idea of running their own franchise and being their own boss.

After 10 years in business, Prithi happily shares what makes them proud of being able to own and operate a Crest franchise. “Our biggest achievement is we bought our own house. We never believed we’d be able to do that with what we were doing before. It would have taken 20 years; we did it in five.”

They actually own three properties, two as investments. “It’s something for retirement,” says Prithi.

The two received their 10 Year Long Service Award during a special recognition at the CrestClean annual Masters Conference, held at the Rose Park Hotel in Auckland.

“They are quite an amazing team. They never say no to anything,” said Viky Narayan, Regional Manager of South and East Auckland.

“Davendran invested in carpet cleaning and now he’s one of the busiest on my team. Everyone loves him. I need another ten years out of you, mate!” he joked.

The fondness is mutual, says Prithi. “Viky is lovely to work with. He gives us extra jobs to earn extra money, which is good for vacations. We just came back from Fiji with our daughter, who is 13 years old.”

Prithi says that running a successful business requires “a lot of communication with customers. It’s good to see them appreciating our work. One customer we have had since the beginning, 10 years, and we can’t wait until Friday to see them.”

“They’re not just customers; they’re your friends,” she adds.

And their best advice for someone considering buying a Crest franchise would be to go for it. “If you’re thinking of doing something on your own Crest is the place to do it. The best part is you’re your own boss and the money is good. After paying all your expenses you still have money in your pocket.

“Crest keeps you growing,” says Prithi. “You’re not stuck in one place. It gives you wings so you can fly.”