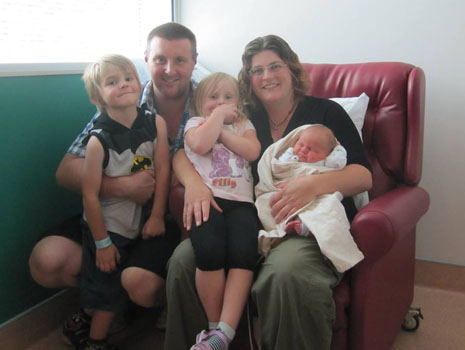 James and his wife, Marlen, and their children Luca and Elina, and their brand new brother, Stellan.

As the new Regional Manager for Central Otago, James will be overseeing CrestClean’s operations in this growing area, which includes Alexandra, Cromwell and Queenstown.

“I’m looking forward to getting stuck in, building the business and gaining new clients,” he says. After only a few days at the helm and with only one franchisee to assist him in this large region, he’s already gained a couple of new customers. He says, “I’ve jumped right into some of the contracts. I’m literally on the tools myself, which is a great way to get into it. There’s been heaps of floor polishing to do.”

Fortunately, many years ago during his student days he worked as a commercial cleaner, so he brings practical experience to his new role.

He also brings a background in customer service and retail to Crest. He has Bachelor’s degrees in Tourism and Commerce from the University of Otago, and though he’s a born and bred South Island boy, his interests have taken him as far afield as Switzerland, where his wife, Marlen, is originally from.

“We thought it would be good to spend some time overseas and decided to do it before the kids get too old,” he says. James and his wife have two young children, Elina and Luca, ages three and five, and a newborn son, Stellan, who is just eight weeks old. They returned from Switzerland about two years ago and decided to settle in Alexandra “for a better lifestyle and land with lots of space to raise the kids.”

James was interested in purchasing Central Otago because, he says, “I wanted to work for myself instead of working for someone else for the rest of my life. Crest suits me because it’s about serving customers and I’m hoping I’ll be able to pursue a good work and life balance.”

At the moment, it sounds like work is tipping the scales, as during his free time he’s building a house on their large acreage. “It’s slow going because I’m the only builder,” he says with a laugh. “It’s a busy life, but I love it.”