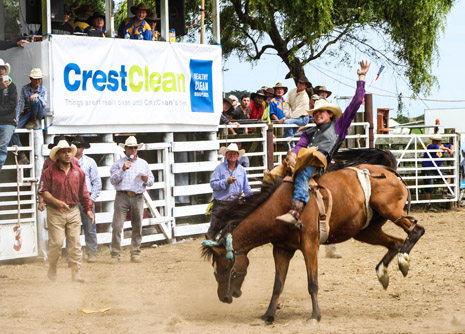 It will be known as the “CrestClean Opotiki Rodeo” for the next three years due to support from Whakatane franchisees Geoff and Di Price.

For 54 years, bronc riders, ropers, barrel racers, and other cowboys have gathered at what’s now being called the “CrestClean Opotiki Rodeo,” thanks to Whakatane franchisees Geoff and Di Price.

This entrepreneurial CrestClean team, with support from the greater Crest company, have undertaken sponsorship of the popular local event for the next three years.

This year’s was held on a beautiful summer day at the end of December and drew over 3,500 people – quite an influx for a town of just 5,500. Being seen as part of this tight knit and vibrant community was Geoff’s motivation for supporting the event.

“My goal was to get our name out there and show that we are in the community so people understand that we’re local,” says Geoff, who has been a Crest franchisee for nearly five years. “Because of our television commercials, people see us as a national company, which is good, but for us it’s about making sure people know we’re locals, too. We live in town, we work in town, we spend our money in town. We get our CrestClean vehicles serviced on Main Street. CrestClean is a part of this community.”

CrestClean’s information table at the Opotiki Rodeo was decorated with bright, visible flags and banners.

The rodeo has been a great vehicle for the CrestClean name. In the days and weeks leading up to the event, radio ads filled the local airwaves and CrestClean banners were visible along Opotiki roads and on the approaches to Tauranga, Rotorua and Gisborne.

On the day itself, a large CrestClean banner hung from the judges’ commentary stand, overlooking the main ring, and served as a colourful backdrop for a lot of bucking horses and angry bulls. “It also covered up a lot of graffiti, so people were happy about that,” says Geoff. 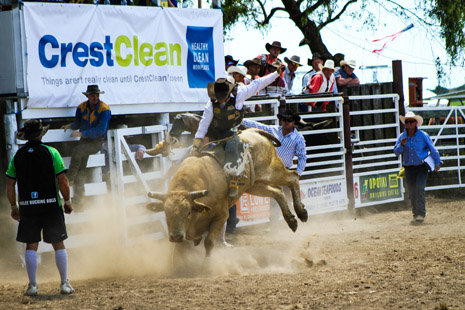 The CrestClean banner provided a bright, clean background for the professional shots from Zach Rayner at Pitbull Photography.

Geoff and Di manned a table decorated with CrestClean flags and gave out information about the company and free samples of hand sanitiser, which were well received. “It was so hot and the main events were at end of day, so when it was over I stood in the middle of the gate and handed out sanitiser bottles as people were leaving,” says Geoff. “Now, the last thing people will remember is Crest and they’ll have that hand sanitiser sitting in their car, which is a handy place to keep it.”

Geoff and Di also volunteered cleaning services during the event, picking up rubbish and making sure the toilets were clean and sanitary, which has already paid back in positive recognition.

“We were in a local café having coffee the weekend after the rodeo and a lady walked up to us and asked if we were the ones cleaning at the rodeo and said she was extremely surprised by how clean toilets were,” recalls Geoff. “Something like that can change the whole mood of an event. People were also noticing that there was very little rubbish and that can also change people’s attitudes. If an area is clean people generally want to keep it that way and will dispose of their rubbish properly.”

“Overall, it’s been a very good response,” he adds. “We didn’t expect to get too many leads up front, but all businesses need cleaning services and there are a lot of growing industries in this area staffed by people who now recognise us in the community.”

The CrestClean banner provided a bright, clean background for the professional shots from Zach Rayner at Pitbull Photography.