CrestClean Goes Back to School with New Ormiston Primary 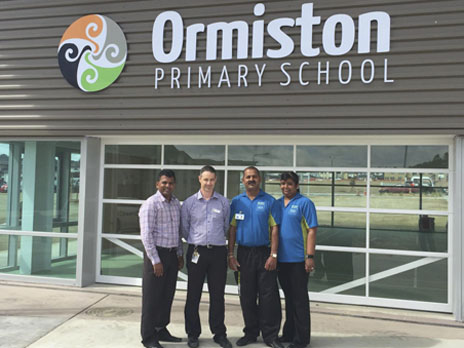 The CrestClean team of Salen and Rakeshni Prasad will be keeping the brand new Ormiston Primary School clean for Principal Heath McNeil and his young students.

It’s the first day of school for a brand new primary in East Auckland. Ormiston Primary School’s beautiful new facility will be kept looking shiny by a dedicated CrestClean team on site daily.

The new school’s construction follows in the footsteps of nearby Ormiston Senior College, the first New Zealand school to achieve a 5 Green Star Education Design rating. The primary school anticipates achieving the same rating from the New Zealand Green Building Council, which certifies buildings based on environmentally responsible construction, such as energy efficient lighting, solar water heating and power and sustainably sourced materials.

CrestClean’s South and East Auckland Regional Director Viky Narayan says his team’s significant experience with schools, including Ramarama School where Mr McNeil was previously principal, helped in the selection of cleaners for the new facility. “Principals like Mr McNeil appreciate the professionalism and quality of work that’s part of Crest’s approach to school cleaning.”

The school’s green construction and features do not require any special efforts on the part of the CrestClean team of Salen and Rakeshni Prasad, who use CrestClean’s custom line of environmentally responsible chemicals and are trained in the latest green cleaning procedures. They’ll be able to keep it looking and feeling as clean and hygienic as it did on the first day of school.