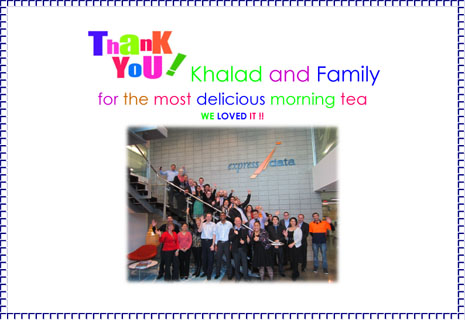 A thank you note for CrestClean franchisees who provided morning tea.

For the past six years, CrestClean franchisees Khaled and Zeynab Khaled have been providing cleaning services for Express Data Limited’s head office in Mount Wellington, Auckland.

As a way to recognise and show appreciation for one of their longstanding customers, the Khaleds decided to provide morning tea for the staff of about 40 people.

Plates of homemade slices and brownies were on the menu and made for a delightful break for the Express Data team. “The staff have a VERY sweet tooth, so you can imagine how delighted they were,” says receptionist Liz Moynahan.

Express Data showed their appreciation right back with this great ‘Thank You’ letter, featuring a photo of the office staff, sent to Khaled and Auckland’s Regional Manager Dries Mangnus.

“Khaled has a very good relationship there and he’s the only guy that’s cleaned it since we’ve had the contract,” notes Dries. “It’s like he’s become part of their company.”

Khaled and Zeynab have been franchisees since July of 2008 and manage several contracts throughout the Auckland region.

“We appreciate Khaled, who has been with us for six years, from the actual beginning when we moved into our new premises,” adds Liz. “He and his family are very much part of the Express Data Team.”