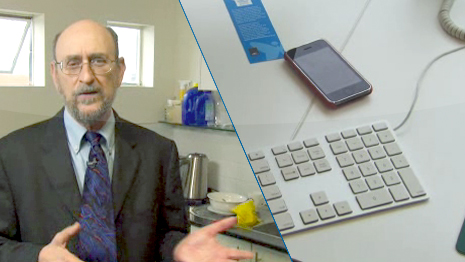 New research from Dr Charles Gerba shows just how quickly viruses can spread in a building.

That’s the verdict of a recent study from a team led by Dr Charles Gerba, a microbiologist at the University of Arizona, Tucson.

The New Zealand Herald reported the findings yesterday, which were unveiled at a conference in Washington, DC. The study provides new insight into just how quickly a virus can spread around an office building or workplace and confirms the need for anti-viral sanitisers.

Dr Gerba’s team used “tracer” viruses to track contamination, placing them on just a single commonly touched area, like a doorknob or tabletop. Within two to four hours, they found, the virus could be detected on 40 to 60 percent of workers and visitors in the building.

“In the office, the first area contaminated was the coffee break room. Viruses also traveled from room-to-room as hotel staff cleaned the rooms. If you hear someone coughing and sneezing in the room next to yours, the virus they have may be in your room the next night,” they wrote in a brief on the study.

However, the New Zealand Herald reports: “There is a simple solution for combating the spread, says Dr Gerba, who found using disinfecting wipes registered as effective against viruses like norovirus and flu, along with hand hygiene, reduced the spread by between 80 and 99 per cent.”

“Dr Gerba concluded: “The results show that viral contamination of (surfaces) in facilities occurs quickly, and that a simple intervention can greatly help to reduce exposure to viruses.”

This new research further supports past findings by Dr Gerba on how poor office hygiene leads to decreased worker productivity. In 2010, CrestClean invited Dr Gerba to New Zealand where he presented a series of seminars in Auckland, Wellington, Christchurch and Dunedin on the topic of workplace hygiene and how to prevent the spread of germs.