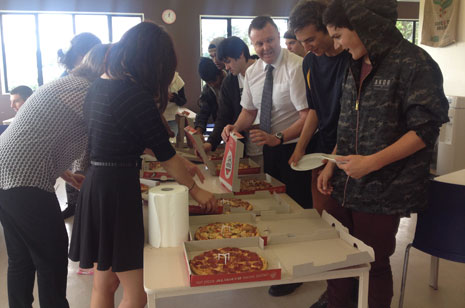 North Shore Regional Manager Caroline Wedding believes in getting involved with customers as she says, “It adds value for them and allows the CrestClean franchise teams to become more a part of the team rather than just being seen as the cleaners.”

A great example of this is Sharon Singh and her involvement with the students of Academy New Zealand, an institution for young school leavers to gain practical skills and qualifications.

Sharon treated the students to a pizza lunch as a thank you for helping her to keep the school tidy.

“She’s is a great member of the North Shore team,” Caroline says, “This is an example of her generous nature and commitment to the school.”

Sharon is originally from Fiji and moved to New Zealand with her family in 1999. After talking to her uncle, Rakesh Bhan who owned a CrestClean franchise in Tauranga, her family began to consider joining CrestClean.

She says, “He was always saying how good and flexible the business is so as a family we decided that this would be a great investment as we could adjust the business to suit our lives. How big or little our business was really up to us.”

With jobs popping up everywhere, eventually Sharon was given the opportunity to take on the New Zealand Academy contract. She jumped at the chance and it wasn’t long before she was getting involved with the students.

“I’ve always liked to be involved in the school,” she says, “When the Academy had a new Principal come on board, I mentioned things around the school that could be improved, such as the rubbish bins not being used correctly and he took it all on board.”

Pictured Left is Franchisee Sharon Singh and Right, the stack of Pizza ready to be devoured

When Caroline mentioned the famous CrestClean Cleanest Classroom Pizza Awards to the new principal, Tony, he thought it was a great idea to encourage the Academy students to be proactive about the cleanliness of their classrooms.

“After that I began to give Tony a report on the cleanest classrooms each month and overall we saw a huge improvement in all of the classes,” Sharon says.

“I used to have to pick up large pieces rubbish off the floors before vacuuming which used to take up to 10 minutes as they have 13 rooms and all of a sudden I didn’t have to do that. The toilets had the same problem and again I saved about 10 minutes. So now with the pizza incentive, I don’t have to do this extra work and it allows me time to get on with other important cleaning jobs.

Overall Tony and I wanted to show all the students how much we appreciated they hard work in keeping their classrooms clean. We will start the pizza deal again with the new students arriving next year and we are looking forward to a great year with new students!!

It’s such a pleasure working for the Academy, the tutors and Tony are great. We really are not just the cleaners when we walk into the building, we feel as if we are part of their team.”