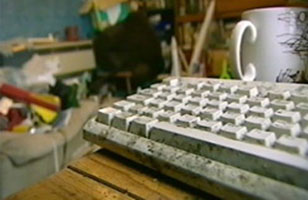 Office workers would be better off eating their lunch in the lavatory because of the filthy state of most desks, a report says.

A poll of 500 employees found that only one in ten cleaned their desks, computer keyboards and phones twice a year.

Connections, a Manchester based recruitment firm, said that the results of its survey were “horrifying”. It pointed to a recent US report, which showed that the typical office desk harboured 400 times more disease-causing bacteria than a lavatory seat. Office fax machines had bacteria levels three times higher than the bathroom door.

“The British are becoming increasingly fastidious about cleanliness in their own homes, and yet the workplace, where they spend vast majority of their waking hours, is being woefully neglected.”

Michelle Kingsley, a director of Connections said, “Viruses can spread around offices in no time, especially if employees are hot-desking.” “Employers should make it their business to ensure that all surfaces are thoroughly and regularly cleaned to minimise the risk of contracting germs.”

The report said that many employers had cut down on professional cleaning, relying instead on staff to clean their own work areas, which amounted to an “alarming health hazard”.

by Jenny Booth
Article from “The Times” Newspaper, England. 11 August 2004